When Wu Chun (吳尊) married his wife Lin Liying (林麗吟) 16 years ago, he was still in Taiwan and a member of the idol boy band, Fahrenheit (飛輪海). To protect their privacy, Liying had to take her own solo wedding photos and never even thought of holding a wedding ceremony. 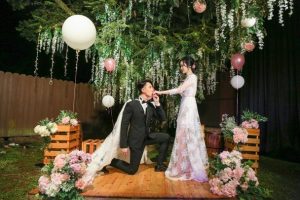 Now, two kids and 16 years later, Wu Chun believes it is about time to make it up to his wife.

In the Chinese reality show Before Marriage <婚前21天>, the normally private couple opened up to the public for the very first time. The show gave viewers a glimpse of Wu Chun and Liying’s married life, and detailed Wu Chun’s attempts in convincing Liying to take new wedding photos and hold a wedding ceremony.

Their wedding finally came into fruition in the most recent episode, and their guests were none other than their children, 9-year-old NeiNei and 6-year-old Max.

While Wu Chun was in the middle of an interview, NeiNei surprised him with a short dance. Then, the curtains behind her drew open, revealing Liying in a wedding dress. Wu Chun immediately burst into tears upon seeing his wife. He wiped his tears and said, “You’re so beautiful!”